Hassan Khan wore a checkered blazer, green slacks and tan leather shoes to his graduation ceremony Tuesday night, even though it took place at the drive-in.

“My colleagues make fun of me that I find any excuse to dress up,” said Khan, one of 34 doctors who spent the last three months of their University at Buffalo internal medicine residency program working the front lines during the Covid-19 pandemic.

The ceremony was a far cry from more formal residency commencement affairs that that traditionally take place in some of the city’s finest restaurants.

For a time, thanks to the pandemic, it didn’t look like this one would come off at all. So when it did, Khan wanted to mark the occasion in style.

“It doesn’t matter how many graduations you have, whether it’s middle school, high school, college, medical school or residency,” he said. “Each time, it’s a monumental experience for you and your family, so for that to be taken away, I think would have been a major disappointment.”

The event capped an incredible three years in which the residents and their peers in related fields first witnessed an explosion in regional medicine, touched off in part by the move of the UB Jacobs School of Medicine and Biomedical Sciences to downtown Buffalo, and ended during the most sweeping pandemic since the Spanish Influenza outbreak a little more than a century ago.

“This is the most interesting and most challenging time to do what we do,” said Dr. Jason Edwards, a Niagara Falls native who attended UB as an undergraduate before attending medical school and doing his residency at his alma mater.

Dr. Jordan Cinquino, an internal resident graduate, addressed a crowd of about 150 gathered for the commencement ceremony. “What we can say with certainty is that we’ll be prepared” for what comes next, he said in a prerecorded address. (Harry Scull Jr./Buffalo News)

The internal medicine residency is one of several such programs at UB focused on education, patient care and community service. Residents have spent at least 11 years in higher education – four as undergraduates, four in medical school to become doctors and three years in post-medical school training.

Edwards labored through his medical school days on UB’s South Sampus in older buildings that included basement classrooms. He spent most of his residency at Erie County Medical Center.

Khan worked mostly at Buffalo General Medical Center, though both doctors also sometimes handled shifts at the VA Medical Center in Buffalo. Others in the program were assigned to Roswell Park Comprehensive Cancer Center.

Khan was halfway through his stint as chief resident for internal medicine at Buffalo General when the pandemic swept into the region. His job morphed from a largely administrative one – scheduling weekly 80-hour work shifts and helping faculty and fellow residents juggle academics and clinical demands – to focus on virtual education, resident responsibilities and Covid-19, and jumping into shifts when staffing came up short.

“One of the biggest concerns that our residents had, especially early on, was about PPE, the personal protective equipment,” he said, “and not knowing if our hospitals had enough. The policies were constantly changing around that.”

He and Edwards expressed gratitude for companies and individuals who donated PPE – and food.

“I haven’t paid for a meal at the hospital in a long time,” said Edwards, who moved from an outpatient primary care clinic – where telehealth became more common – into roles split between the ECMC emergency department and the intensive care units at Buffalo General and the VA. 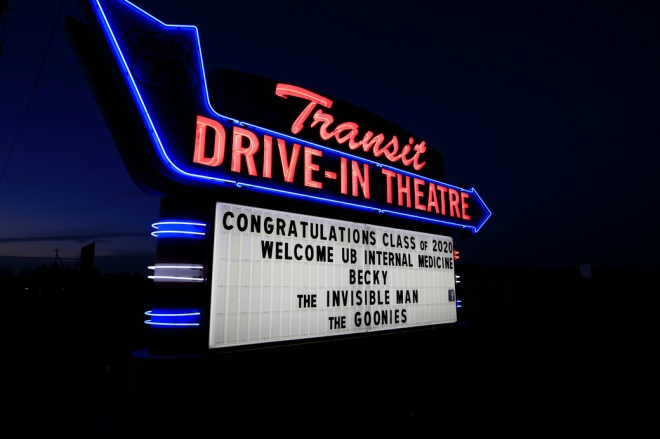 Both young doctors marveled at the abilities and professionalism displayed among nurses, residents, the more senior UB fellows, attending physicians and other staff as medical-surgical floors and ICUs filled with seriously ill patients. They worked to protect themselves and their families from contracting the novel coronavirus – in some cases while worried about someone sick at home – while they did their best to treat patients for a disease without proven treatments or a cure.

“We’ve had this dynamic flow of information,” Edwards said. “Data information is getting here in the blink of an eye, but we have the obligation to go through it and figure out which data is actually solid and where we should be making our recommendations.”

Health providers continue to do their best to comfort patients and connect them by smartphone or iPad to loved ones prohibited from visiting hospitals because of the contagion. Too many of those connections continue to take place on ICU death beds.

“The physically intensive work, like putting in central lines, is the most challenging,” Edwards said, “and I think it’s also the idea that Covid is attempting to take away the dignity of life. This virus made it so that a lot of times you have to say goodbye to your family before you get into an ambulance.”

The pandemic, and last couple of weeks, underlined other stark realities in their residencies. Some patients and co-workers lost jobs, at least temporarily. Depression and anxiety pierced the mantle of patients and professionals. The new coronavirus also has disproportionately affected blacks, who on average live shorter lives and carry greater disease burdens in the region than those of other races.

Khan participated Friday night at a “White Coats for Black Lives” demonstration on the Buffalo Niagara Medical Campus and in Niagara Square. Edwards was on call and needed to be at ECMC but participated Saturday morning in a similar event on the hospital grounds.

Both knelt during those gatherings for 8 minutes and 46 seconds in memory of George Floyd, who died while under the knee of a Minneapolis police officer for the same amount of time.

The doctors said they are proud to be part of a field that blends the talents of people of all colors, creeds, religions and sexual orientations.

Thirteen of the graduates are from the United States, while others come from Canada, China, India, Jordan, Pakistan, Peru, Nigeria and Sri Lanka. All but one will next work as a fellow or full-time physician in the United States, including half in greater Buffalo, said Dr. Regina Makdissi, a clinical hospitalist at ECMC, director of the Internal Medicine Residency Program and a clinical assistant professor at the Jacobs School.

Khan, 29, born and raised in Stoney Creek, outside Hamilton, Ont., attended medical school in the Caribbean. He spent the last two years of that experience working at hospitals in New York City and New Jersey before starting his residency. He, his wife, Nimra, and their 4-year-old son, Hadi – all of whom attended the graduation ceremony Tuesday at the Transit Drive-In Theatre in Lockport – will remain in the region for at least another three years as Khan tackles a fellowship in cardiology through UB.

Edwards, 31, who like the Khans lives in Amherst, will soon reunite with his longtime girlfriend, Dr. Amanda Maliphol, a family doctor he met while the two were UB undergraduates. She went to a different medical school and is about to wrap up an out-of-town residency program. They plan to make the City of Buffalo their home.

Edwards – who will work in the primary care and hepatology clinics at ECMC and become an assistant clinical professor in the medical school he once attended – was known for his casual style during his residency. He favored blue hospital scrubs over a white coat, lululemon commuter pants and a pair of sneakers from his extensive collection.

He wore sunglasses, a UB-friendly blue-and-white-striped seersucker suit and Converse X Comme Des Garcon sneakers to the graduation, a playful dig to the the panache of Khan, his friend.

“Internal medicine has more of a blue-collar feel, like Buffalo,” he said. “You roll up your sleeves and get to work.” 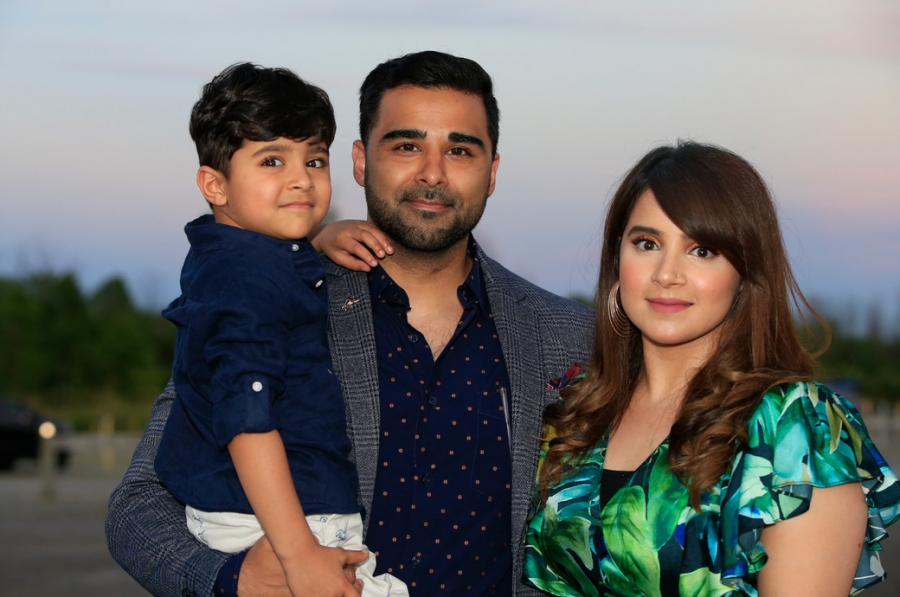 Dr. Hassan Khan, who has served the last six months as chief resident at Buffalo General Medical Center, with wife Nimra and their 4-year-old son, Hadi, before the start of his graduation ceremony. Khan will next serve a cardiology fellowship at the hospital and the Gates Vascular Institute next door. (Harry Scull Jr./Buffalo News)

They and other graduates expressed thanks to Makdissi, who spearheaded the celebration, the first of four medical school ceremonies to take place at the drive-in. The pediatrics, neonatology and surgery residency programs scheduled similar events.

“Aside from improving the program, Dr. Makdissi really cares about the residents and I think that that comes through, even in this scenario with graduation,” Khan said.

Makdissi said the pandemic has provided valuable lessons for all health care workers. Among them: “When we work together as a team, everyone feels supported.”

Solid communication, transparency in treatment, acknowledging uncertainty and celebrating even the smallest of victories are also lessons she hopes will endure.

Residents saw the graduation ceremony as one of those wins – and were relieved it happened. First came its cancellation; then the first scheduled date, June 3, had to be changed because it conflicted with a curfew in Erie County, where almost all the participants live.

“It felt like we couldn’t catch a win,” Khan said, “but I think everyone understood that safety is the most important thing, and we were still feeling very lucky and fortunate to be able to have the graduation.”

As night fell Tuesday, a prerecorded ceremony started on one of the five drive-in screens. It included words of encouragement from Makdissi; Dr. Anne Curtis, chairwoman of the Department of Medicine at the Jacobs School, who also attended; and Dr. Jordan Cinquino, a graduate and chief resident. A series of photos from students and faculty followed.

Afterward, graduates tossed surgical masks into the air instead of caps, then resettled at their cars, SUVs or lawn chairs to watch “Patch Adams,” a feature film that urges doctors to show greater humanity toward patients.

“We’re so happy about this,” Khan said.

Calgary woman speaks up about challenges of living...

Concerns Arise Over Blood Donated by People on...

Effect of COVID-19 lockdown on alcohol consumption in...

An Easy Way to Stay Updated on HIV...

As the HIV Population Ages, Other Health Conditions...

COVID-19 Is More Than the Common Cold: Fauci...

What to know about COVID-19 and organ...

This website uses cookies to improve your experience. We will assume you are ok with this, but you can opt-out if you wish. Accept Read More